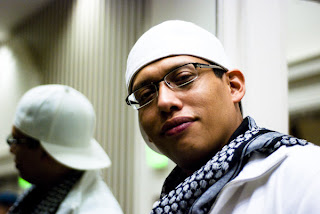 He’s larger than life and twice as fast – Vancouver’s Zaccheus Jackson is a modern storyteller with a hiphop twist, and he’s featuring at CFSW 09.

We checked with him to get his take on spoken word in Canada, family storytelling and why poetry is like video games.

CFSW 09: You are known for 2 things: your mile-a-minute delivery and your crazy stories. How would YOU describe your work?

ZJ: I've always considered my work to be real Life, w/ a little bit of rhythm. The majority of my writing is non-fiction, socially based, and opinionated - but also as universally appealing as possible. The years I spent on the streets of North America taught me that a person's time and energy is one of the most valuable things they can share w/ you; and as such I have always been of the opinion that if people are going to listen, then the performer has a responsibility to say something worth hearing.

As far as the mile-a-minute delivery, well, that I can only blame on the ADHD.

CFSW 09: You are an incredibly engaging storyteller. Who told you stories while you were growing up? Was there an influential storyteller in your life?

ZJ: Growing up on the Haisla Reserve in Kitima'at, BC, it was my Grandfather, Tom Nyce Sr., who would tell stories as he carved canoes in the yard; keeping the oral tradition of our people alive. He was already quite old by the time I started paying any attention to my Grandpa's stories, but my father had the presence of mind to haul 8-year-old me, along w/ one of those old classroom tape recorders, over to Baba's house every Sunday where we would spend three hours recording whatever stories the old carver wanted to tell. Sometimes my father would ask for specific stories and other times we would just sit there and let Grandpa speak.

I can't claim to remember many of the stories he told us in any great detail, but I know as a fact that sitting there listening to my Grandfather tell stories to my father and I - and my father collecting each and every one like some endangered species - taught me the importance and social benefit of story-telling.

CFSW 09: What's inspiring you these days? What is the next project on your plate?

ZJ: For the most part my inspiration comes from the immediate world around me. I try and stay as socially aware and informed as possible, and when I come across a topic that I feel needs to be addressed I will usually try and juxtapose it w/ a story from my own past. I have found that this helps me internalize the topic, while adding a layer of personal intimacy that appeals to the naturally voyeuristic edge of Humanity.

I just got back from the Individual World Poetry Slam and whenever I come back from a poet gathering I am always over-flowing w/ inspiration. My next release will be a 13-track disc called "Dimes, Elephants and Airplanes", composed of material I've written since the release of my first disc "huManifesto" in November 2007; but currently I'm working w/ JakubEvolved and a few other East Van cats on a Hip Hop project that should see the light of day in mid 2010.

CFSW 09: You're one of two Aboriginal features at CFSW Open Mic on Wednesday. Without giving too much away, what can people expect from your performance?
ZJ: Being one of the features at the Aboriginal Showcase is a great honour for me, and while I am obviously proud of my full-blooded heritage, Native issues have been a difficult subject for me to write on. As a Southern Albertan Blackfoot raised in Northern BC I have seen many aspects of my peoples existence, both negative and positive, and have seen the impact that reserve Live, apathy, and the systematic assimilation of our culture have had on my People.

Personally, I am a proponent of the repatriation of Tribal lands, but also the structured removal of any and all government support for Aboriginals; which is obviously not a popular opinion. Many of my people are set in their ways, and the removal of federal support is sure to result in the decimation of three generations of First Nations people; but I believe that after that - weak-kneed and unsure of ourselves, but full of destiny - the Aboriginal peoples of Canada will once more begin to stand, proud and strong.

CFSW 09: You've been to CFSW before as part of the Van Slam Team. What was that experience like? What advice would you give to first-time competitors?

ZJ: I have competed at CFSW three times since 2005 and every single year I have seen the event expand and develop. Canada has such a rich and storied past, and such a proud and varied population that we consistently pull together some of the greatest performers from across the greatest country on Earth, and spend a week together growing and adding to the terra firma of Canadian creationism.

Having represented Western Canada at iWPS for the last two years has also given me a larger appreciation of Canadian performance poetry as a whole. I find that our poets are very edgy and honest and willing to take chances that some of our American counterparts may not. I'm sure this has to do w/ the fact that (unless you're Dwayne Morgan, *grin*) it's damn near impossible to make a decent living off of Poetry in Canada, whereas in the States there is such a prevalence of mass media that damn near everyone is on a constant look-out for their 15 minutes.

I love being surrounded by hundreds of poets at national gatherings in the States, but be it Halifax or Victoria, CFSW has always felt like home.

CFSW 09: Finally, the Dating Game question: if you're performance was a video game, what kind of video game would it be?

ZJ: If my performance was a video game it would probably be Dance Dance Revolution, for centipedes.....