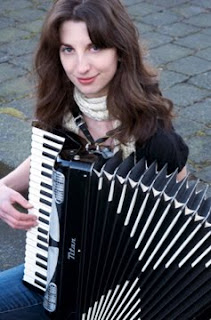 These days, she most often seen cradling a vintage accordion or touring her unique brand of storytelling around B.C.’s North. But Barbara Adler’s also a member of the famed Canadian storytelling rock bad The Fugitives (headlining the Late Night Cabaret on Nov 13).

CFSW 09 caught up with her to get her take on homey goodness of CFSW, singing better and Werner Herzog.

CFSW 09: Barbara, you are long-time Alumni of CFSW. What is so special about CFSW to the Canadian spoken word scene? Do you have a favourite memory of past festivals?
BA: My favorite special thing about CFSW is how it has managed to keep its home-y, friendly quality, while becoming the biggest thing in the Canadian Spoken Word scene. Even though there are more teams than ever competing, the festival is personable, supportive, and a little bit folksy. I mean, I think it's great that the competition isn't as intense as in the National Poetry Slam, and that winning CFSW isn't some kind of super-star moment. I'm not sure I know who the best slam strategist at CFSW is, and I think that rocks.
My favorite memory comes from my first festival, where somehow the organizers in Ottawa managed to scramble together enough soup and sandwiches to feed everyone. There was this genuine sense that we were all going to take care of each other. I think there should always be free food, even if it's ,like, a pickle.
CFSW 09: Your personal style has evolved over the years. How would you describe the work that you are doing now?
BA: Ha ha...how would I describe it... Erm, well, on one front I've become very interested in harnessing longer format storytelling to some of the tricks that performance poetry does really well: language that sounds good, rhythm, imagery that knows how to jump. But if I were to be really honest, I'd have to admit that I'm spending most of my time trying to figure out how to play the 120-button piano accordion well enough to mash it together with pseudo-rap. My favorite things right now are M.I.A and Geoff Berner, and Veda Hille. I think it's starting to show.
CFSW 09: The Fugitives just cut an album this year. What direction did the band take with this project?
BA: Ah-ha! We learned how to sing better and paid much more attention to the instrumentation. The new EP, Find Me, is much more orchestrated and lush to the ear. There is less focus on Brendan and I having poetry moments, because we are pulling more of our weight in the harmonies and instrumentation. We are really proud that the reviews of the EP have all mentioned the strong singing.
Actually, what's funny is that some of the reviewers have actually seemed offended that we are "ruining" perfectly good roots-folk harmonies with weirdo poetry. As a writer, I take it as kind of a back-handed compliment: I'm ruining music! I'm in a band that makes music! Cool!
CFSW 09: You guys are playing the late-night carbaret on Friday night. What can the audience expect from your show?
BA: High energy crescendo; personable banter and warm hearts; theatrics involving banjo, accordion and acoustic guitar; another viable way to take spoken word, kicking and screaming, into the bars.
CFSW 09: Finally, the Dating Game question: If the Fugitives msuic was a short film, what would it be like?
BA: Oh man, when I first read this question, I thought it meant you were going to get us dates. Shoot.
What's that one by that French guy, the one everyone sees in first year film... Oh, forget it, I'm not impressing anyone.
Listen, we wouldn't be a short film. We'd be Fitzcarraldo, by Werner Herzog. It's the one where the main character drags a ship over a mountain so that he can build an opera house in the jungle. Herzog was accused of enslaving the native population to make the film, because he ACTUALLY dragged the ship over the mountain. People DIED! The scene in the film where they show the boat going up the mountain only lasts, like 20 seconds. A moment of impassioned, debaucherous hyperbole, for no reason except that it's awesome. That's us. Come see the show. We will drag a ship over a mountain (but we won't enslave anyone).
The Fugitives rock the late night stage 11pm Friday, November 13– Tickets are $10 at Solstice Cafe and Lyle’s Place. Check out The Fugitives for yourself http://www.fugitives.ca/
Posted by Missie Peters at 10:48 AM