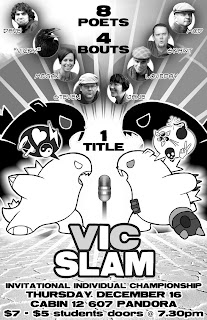 So, here's the deal: Vancouver is holding the Canadian Indie Slam as part of their Vancouver International Poetry Festival in April (http://vancouverpoetryhouse.com/vancouver-international-poetry-festival/) and Victoria is sending a representative.

To decide who that representative will be we're holding a very special, pre-season, invitational Slam on December 16 at Cabin 12. And we're inviting all the team members of the 2009 and 2010 teams to compete for the title.
The Poets:
Skawt Jones
Megan Ann Ward
Dave Morris
Jeremy Loveday
Matthew Christopher Davidson
Jane Bee
Steven J. Thompson

Four Rounds of Madness
Just as at the national competition, we're going to be making our poets compete through not 1, not 2 but 4 rounds of madness with 1-2-3-4 minute poems. Every poet, every round. It's more poetry than you can shake a stick at.
So come on down and celebrate the close of 2010 and the start of Slam with this very special event. All proceeds from the show will go directly to the winner to fund their trip to the festival.
Now that's a good prize.