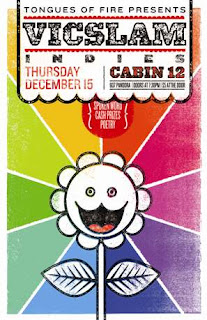 Vic Slam's second annual Invitational Indies are coming up December 15th and there's a lot on the line. The winner will take home the title, the $200 in cash AND get a spot on the national stage at the Vancouver National Individual Slam Championship in April.

So Who Got Invited?
We invited everyone in Victoria who has been on a slam team for the last 3 years, as well as the winners from the 2011 Sept, Oct and Nov slams.

This means that every poet who on stage will have been veted as a winner by YOU, the audience in the past.

Who's Competing?
We had 8 amazing poets accept the challenge and they are already training hard. They are (in no particular order):

What Poems Can They Do?
Poets can use ANY poem they want, including repeats of poems from the regular season. But it must be their original work - all the slam rules still apply: no costumes, music or nudity (that's another show!).

What is the Format?
There will be 4 bare-knuckle rounds of competition. No elimintion, which means that everyone will compete in every round.

Posted by Missie Peters at 9:41 AM