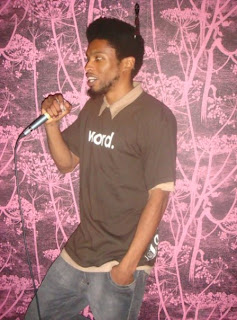 Today we shine the CFSW spotlight on spoken word artist Scruffmouth. This former Van Slam team member is featuring at the Pan-African Showcase on November 13th 3:30 at the Victoria Event Centre.

Read on to found out why Scruffmouth loves Choose-Your-Own Adventures....

CFSW: Your stage name is Scruffmouth - care to elaborate?
SM: My brother gave me the nickname Scruffmouth to describe my scruffy facial hair in high school. When I began writing and performing spoken word and dub poetry, it seemed like a natural stage name over "peach fuzz" and "chicken scratch".

CFSW: You've performed in before, what do you like best about the Vic vibe?
SM: I like the laid back island vibe and the greenery.


CFSW: You were on the Van Slam Team last year, what's your best memory from CFSW 08?
SM: Choose Your Own Adventure on finals stage. Van Slam!


CFSW: What can people expect when you step on stage this year as a feature at the Pan-African Showcase?
SM: 1)PROPS 2)AUDIENCE PARTICIPATION 3)THE BLACK PIONEERS OF

CFSW: Finally, the Dating Game question: If your poetry was the cover of a vinyl album, what would it look like/be titled?
SM: It would be a big tree. The face in the trunk would be me, the roots would be my beard spelling SCRUFFMOUTH, the branches would be my afro, and there would be stuff in the tree like children playing in a tree house, birds, fruits, afro picks and whatnot. The title would be embossed in gold and it would read AURIGINAL.

Scruffmouth features at the Pan-African Showcase on Friday Nov 13. Admission is by donation. Check out www.cfsw09.com for more details.